From lockout assistance to urgent lock rekey, count on our team to be there for you as fast as possible. Our methods are safe and proven, and we are available 24-7.

Case Story - We Have Reasons for Constantly Training

It was a very busy day! I don't know what happened, but many people had lock issues that day. I was just finishing up a job when I was notified to help a customer who was locked out of his car. His location was not far from where I was but the traffic was heavy and it took me about five – six minutes to get there. I don't like taking long to get to clients, especially if they have urgent needs. The good thing was that the customer told me that I was there quicker than he expected and was grateful. It was nice to hear that!

He introduced himself as Mr. Baker and explained that he had left his car keys accidentally in the car. He looked at me in despair, as if I was the only solution to his problem and I really felt for him. He said that his spare key was also in the car and so I took the liberty to tell him that this was a bad choice, explained the reasons and told him what I'd suggest he should do to avoid such situations. I noticed that he didn't have the desperate look in his eyes anymore and that meant I was offering solutions he found easy to follow.


I had to open the locked car and although I have worked on similar ones before, I was extra careful and really focused when I was picking the lock. Such systems are very sensitive and need attention. The door was open a few seconds later. Mr. Baker was thrilled. He got his keys and as I was getting my tools back to the van, I told him to start the engine on and make sure everything was okay. He followed my advice and assured me that everything was fine. He was smiling and told me I saved his day!

This meant a lot to me. Hearing kind words and helping customers fast make everyone on our team happy. That's what we work for! It's really interesting to see how all our efforts and training pay off when we are dealing with awkward situations or high security locks. We have a motto in our company: "learning never dies". Every one of us keeps learning especially as time goes on and new foreign & domestic vehicles with special security systems come out. It's not accidental that we can handle their problems since my colleagues and I inform ourselves about them. Mr. Baker owns some of the newest car models and if I wouldn't have known about their locks, I wouldn't have been able to open them – at least not as fast and smoothly as I did. So, I'll keep on training and learning because people like Mr. Baker need us to do so! 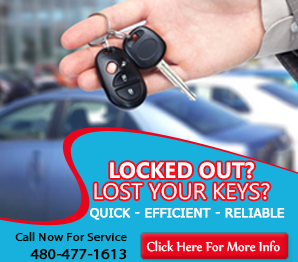 Our company services in Cave Creek